England’s team hotel in Russia is not what you would expect!

England will have to get used to their new sleeping quarters in Russia in the small village of Repino.  The hotel of choice has received some terrible reviews from previous guests complaining about the standard of food, and stating the the rooms are tired and old. It makes you wonder why after so much preparation for the tournament they would leave something so important to chance!  One knows that a good night sleep is crucial for top match sharpness and fitness.

One small consolation is the fact that the players will be allowed to have Televisions in their rooms to play computer games !

Have you stayed there before or know someone that did ? Comment below and let us know. 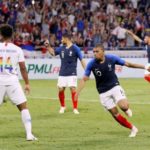