How will this MASSIVE news affect Spain’s chances at the World Cup?

Everyone has been surprised by the news that current Spain manager, Julen Lopetegui will become Real Madrid C.F.  manager after the 2018 World Cup.

Mauricio Pochettino, Maurizio Sauri and Massimiliano Allegri had previously been mentioned as the favourites for the job.

Will this news undermine his current post at the helm of the national squad?  Will it effect Spain’s chances of progressing from Group B? 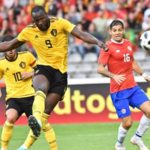 Should England be weary of Belgium?