Colombia took to the pitch with a clear game plan: Interrupt England‘s passing and stop them controlling the match.  Their rough tactics saw them collect 6 yellow cards, including one for their captain Falcao.  They should have even had a clear red card for a head butt by Arias on Henderson.

The Tricolors hard-line tactics eventually led to Sanchez conceding a penalty after he manhandled Harry Kane bringing him to ground.  Kane would convert from the spot despite the 5 minutes of protestations by the Colombian team to try and unnerve him.

Colombia grabbed a late late equaliser in stoppage time and suddenly the momentum swung their way.

The match would need to be decided by penalties and for once England did not falter.

Just as I tipped, England are through to the 2018 World Cup quarterfinals, the 10th in their history, where they will face Sweden. 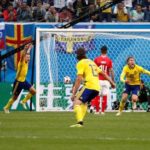 Prediction – Uruguay rocked by bad news ahead of quarterfinal clash with France!